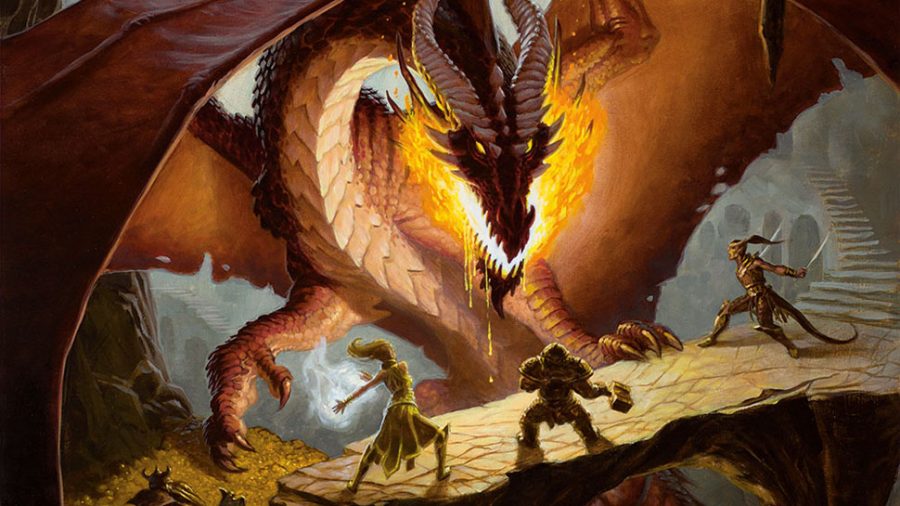 by Marisa Barranco and

Not so long ago, in a land not all that far away, Dungeons and Dragons Club had its first official meeting on Friday, March 9th in the Tutoring Center. Though there weren’t any dragons or wizards to be found, the room was filled with ecstatic students ready to start their quests into a land of magic, accompanied by pizza.

Dungeons and Dragons is a role-playing game based on mythical medieval times, where players create their own characters and go on adventures with their group, led by their Dungeon Master who both tells the story and leads the characters.

Math student teacher Michael Appel is the moderator, creator, and Dungeon Master for the club. Some students in his class had approached him about running a game for them. He says, “I thought we might need to make this an official thing if we’re going to be meeting here, so I met with Ms. Augustyn, and we talked about if we could make it a club.”

Unsure of how many students would join, Appel reports that he had to very flexible in the planning, but the club was “very fortunate with the numbers we got and groups that play very well together so far, and it’s been seat-of-the-pants planning as we go from here.”

Through Dungeons and Dragons, Appel claims, “I’m hoping to reach out to some of the people that maybe didn’t have a social group or a club activity they were really interested in… this gives an outlet for people with different interests.”

Personally, Appel states that he loves the creativity that comes from the game and how the players can create endless paths to take. Even though the Dungeon Master has an idea of where the game will head, it can change in an instant.

“The creativity combined there makes for a wonderful storytelling experience that you could never have reading a book on your own or writing your own story,” Appel reveals. “It’s the combined minds that make for a fun experience.”

Dungeons and Dragons appeals to the creative minds, but its classic fantasy characters, like the dragon or wizard, that players are familiar with and rules enable players to enjoy a structured game.

Dungeons and Dragons is a unique game in itself, so as a club, its qualities are only more profound. When asked to give advice for those considering to start a club, Appel suggested “Start small. Start with your own game group, find some friends who are interested in the game, learn the rules. Google is your friend, there are tons of online resources out there. Communication is a big part of it and keep in contact with each other – that’s how you’ll make sure the game goes forward smoothly.”

In the game, players can perform magic, fight orcs, and go on adventures that have millions of possibilities. So, it should come as no surprise that Dungeons and Dragons Club will make Fridays even more fun for students.

If you’re interested in joining in on the adventure, you can email Mr. Appel for more information at [email protected] or come after school Fridays to the Tutoring Center!