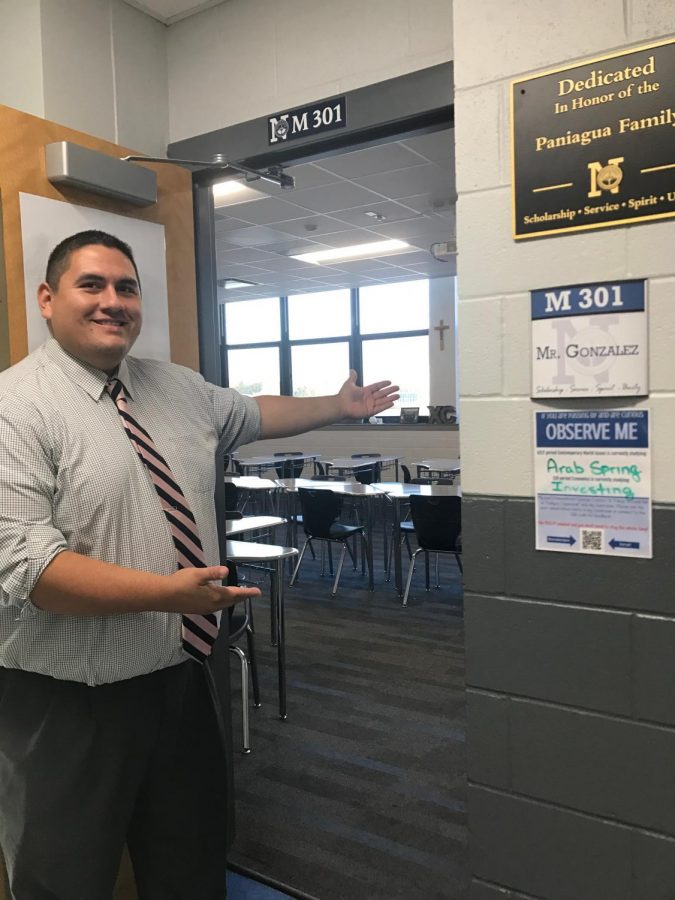 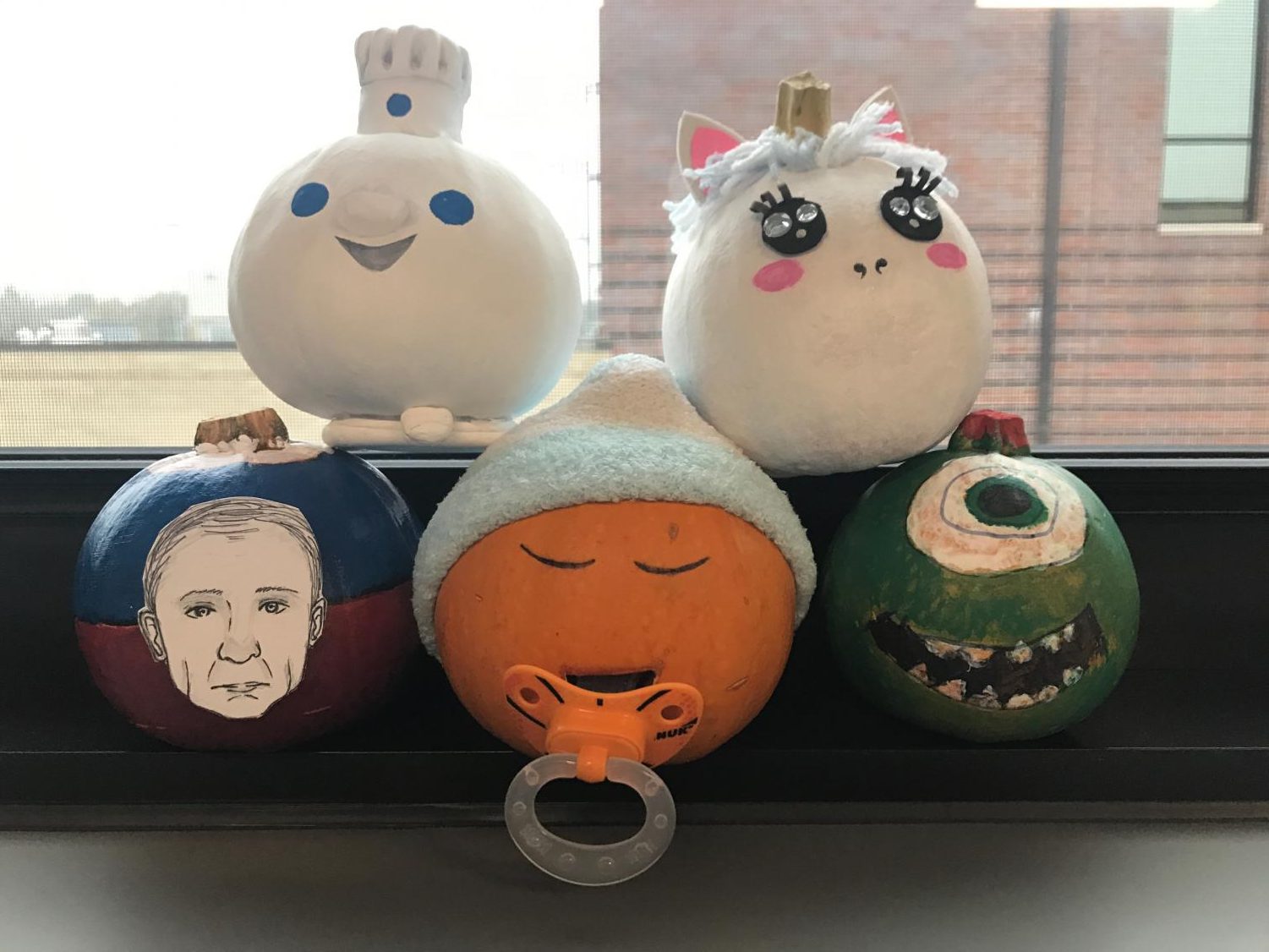 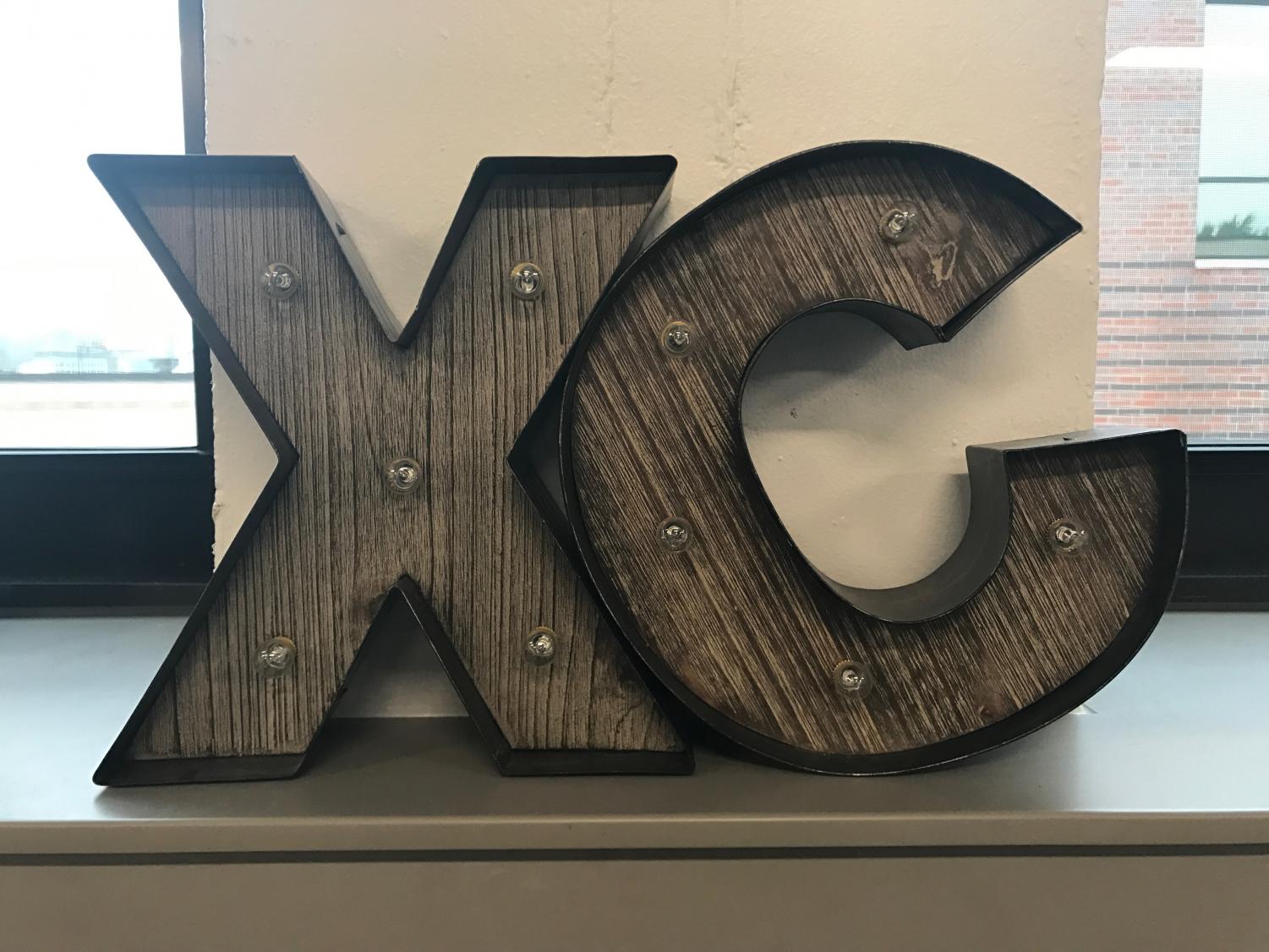 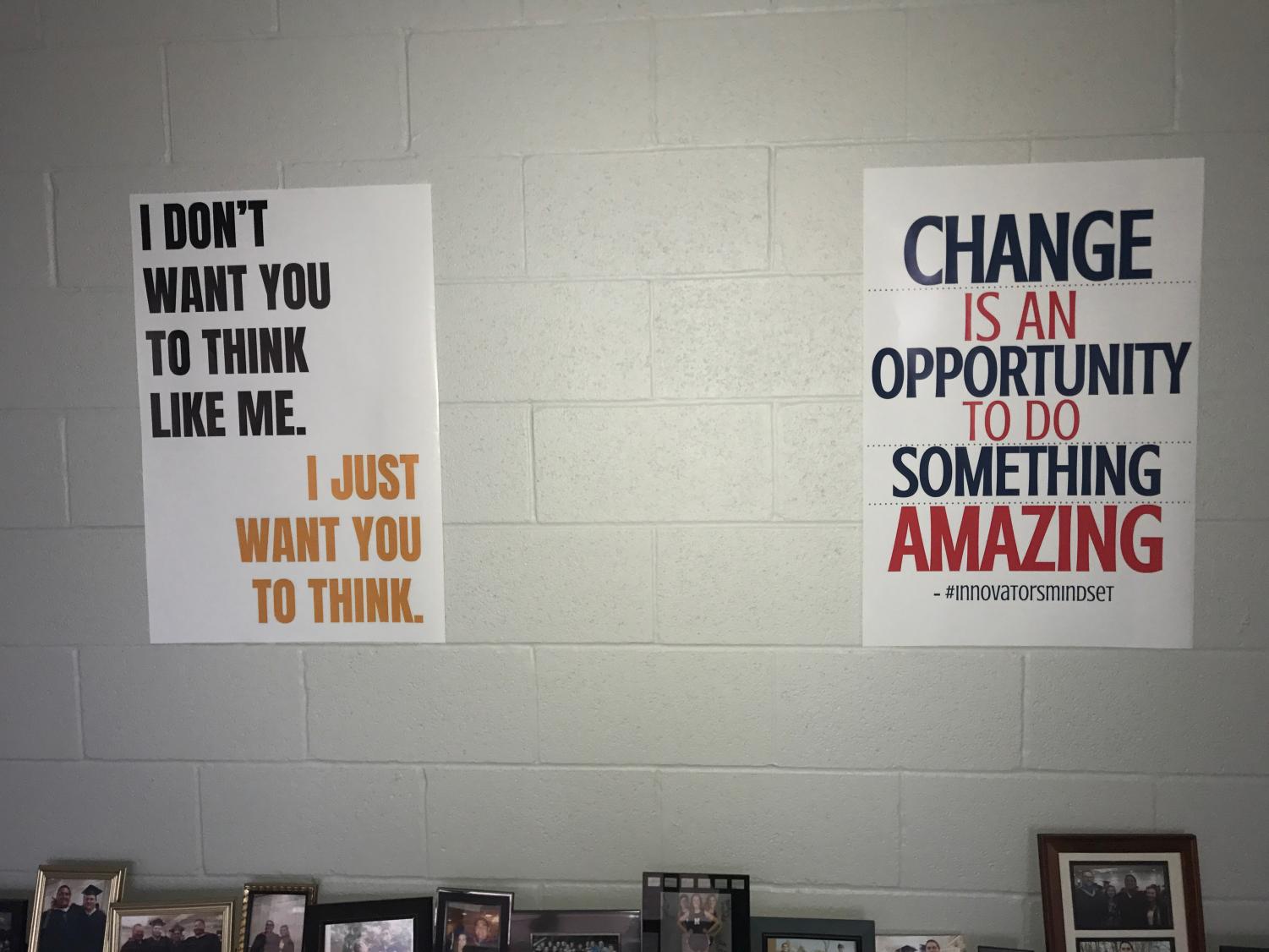 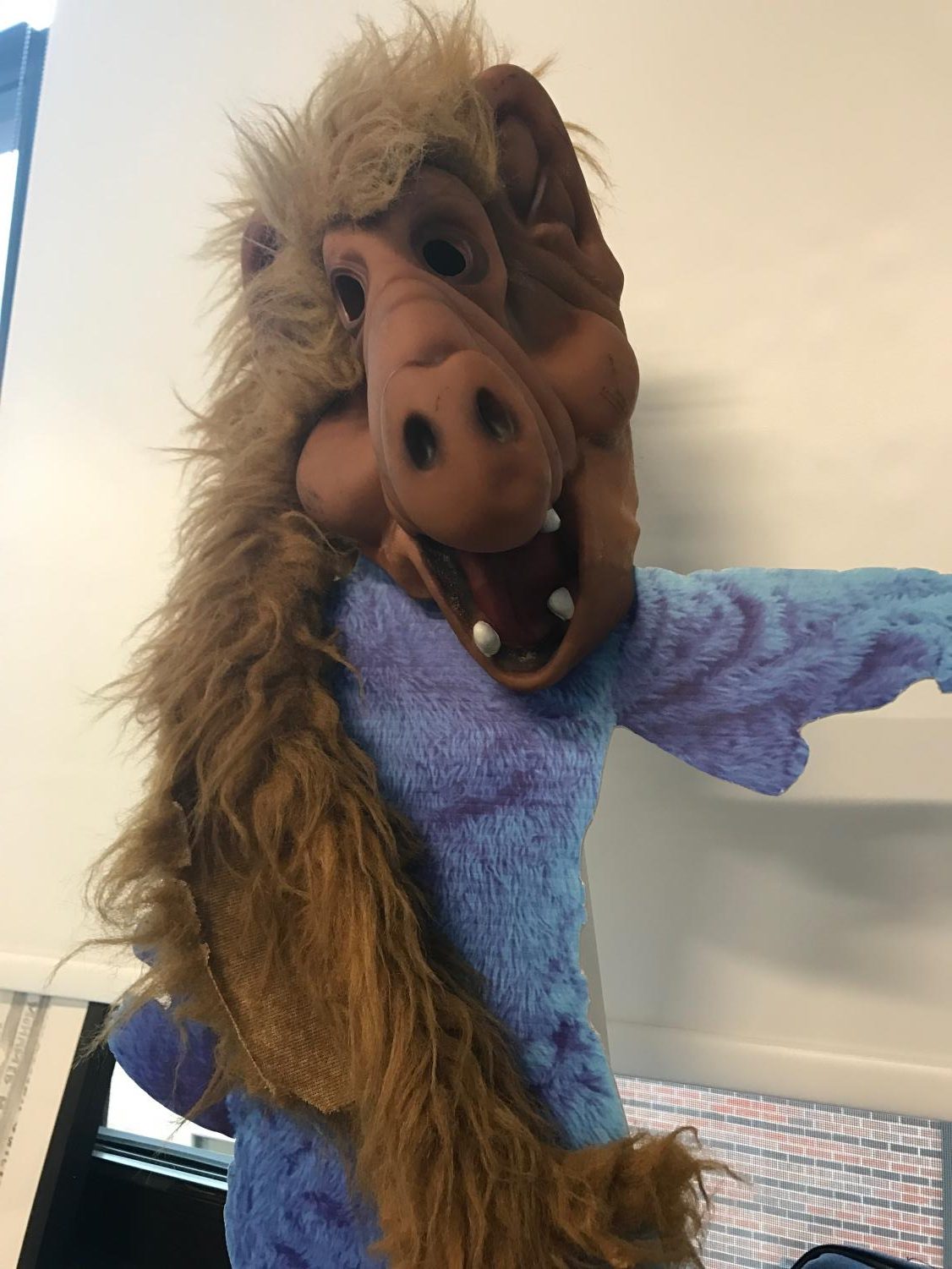 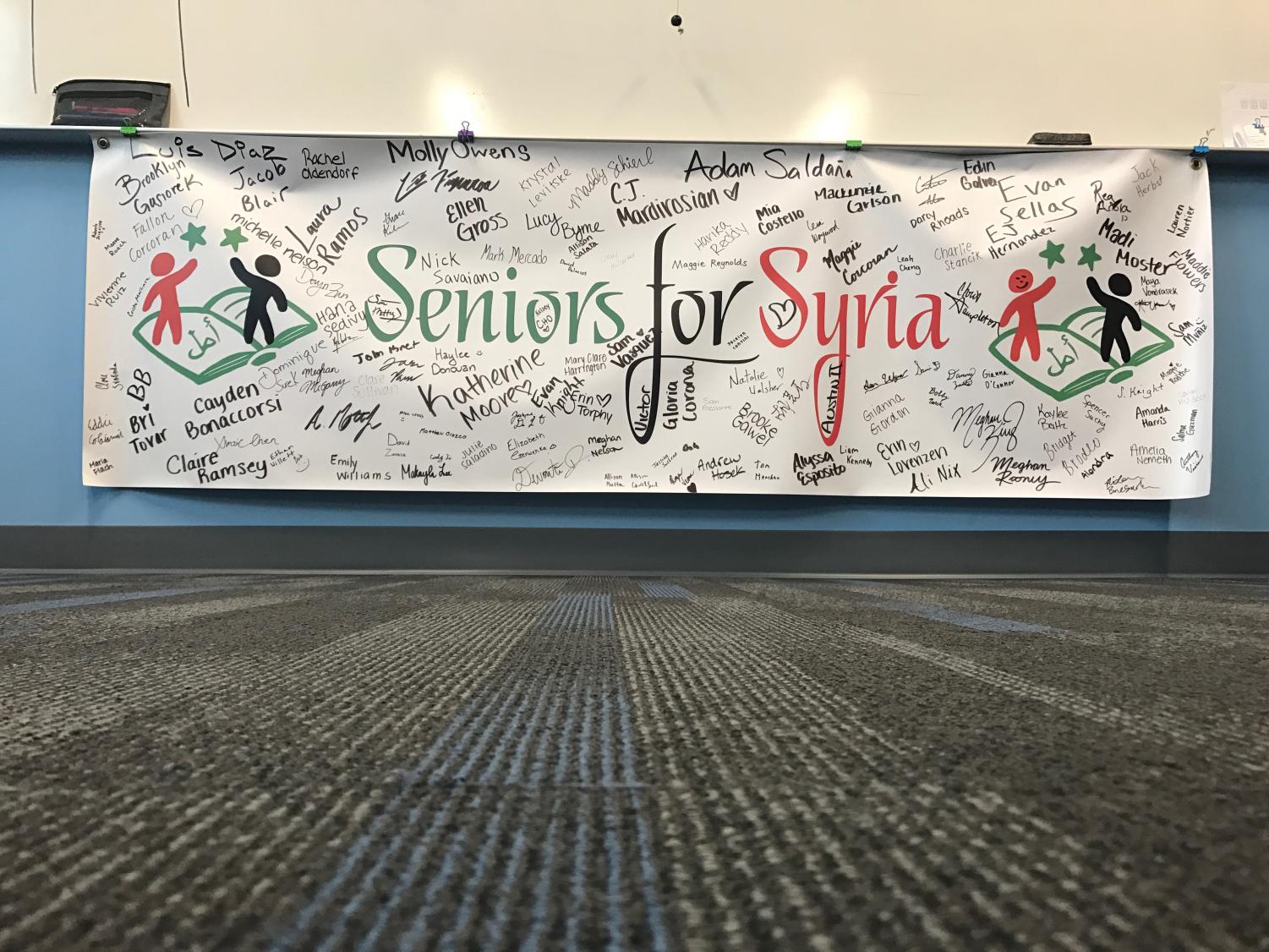 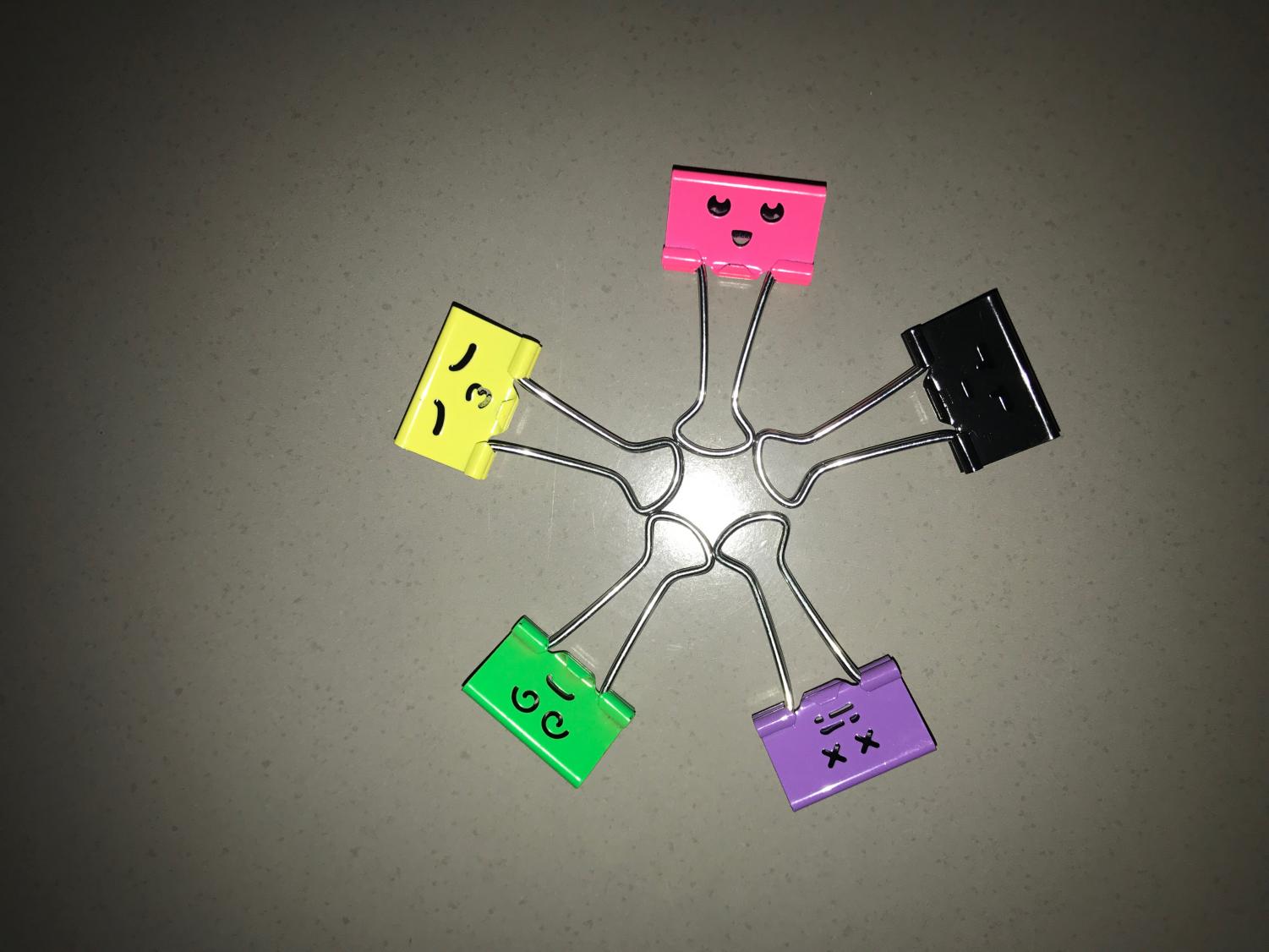 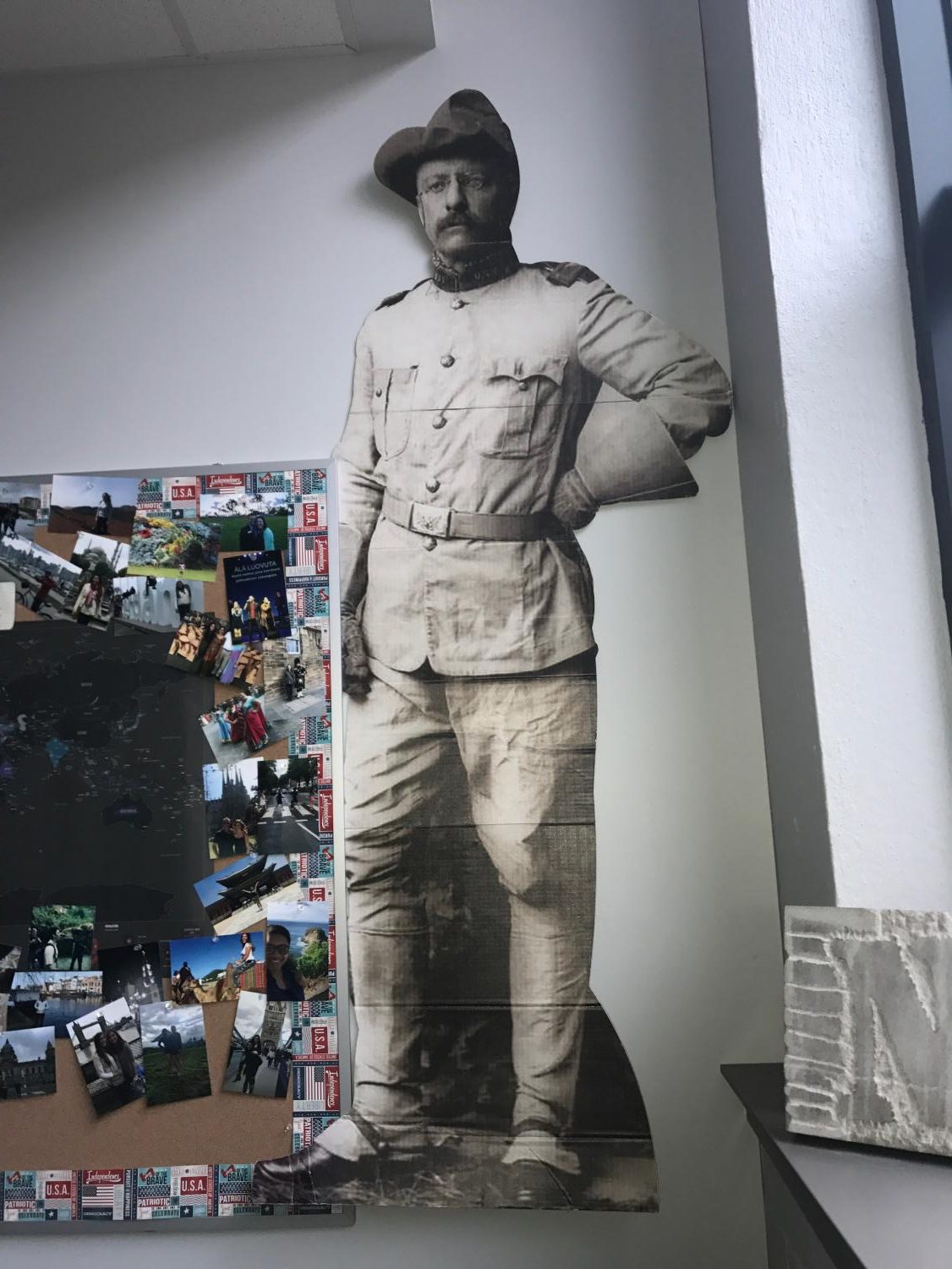 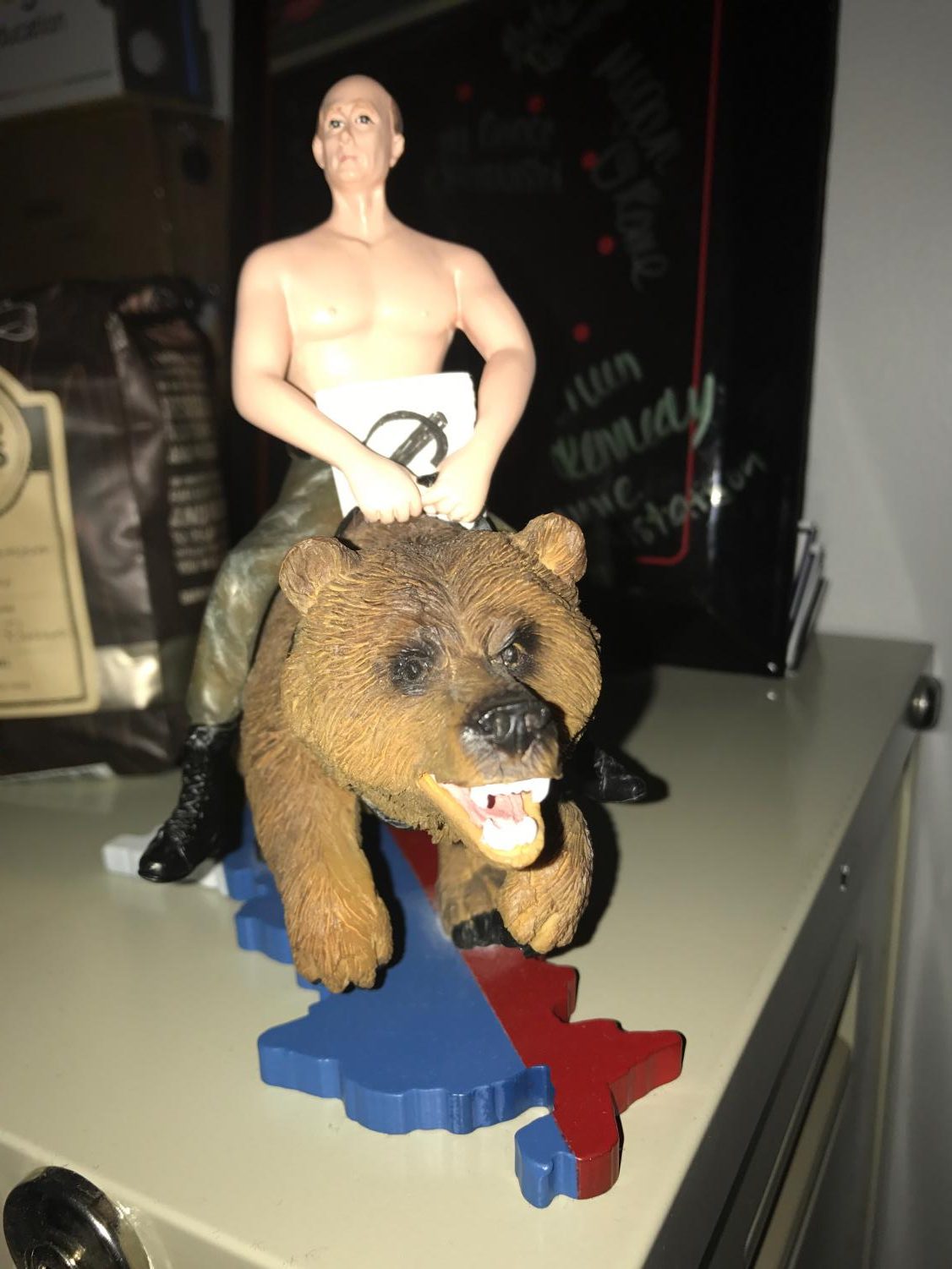 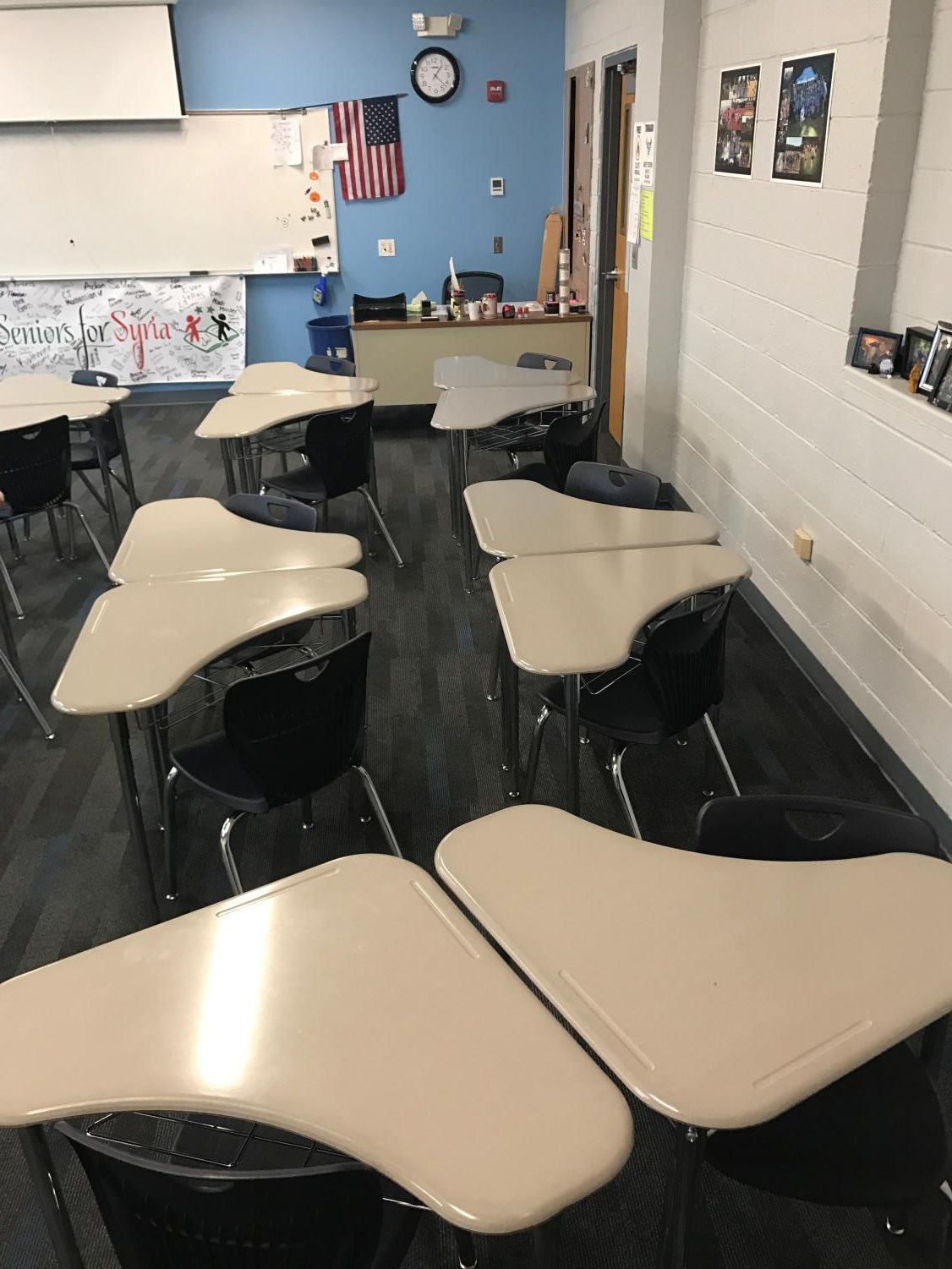 He considers his room to be “eclectic to every class,” meaning that there is a tribute of some sort to each class. Let’s take a look at 10 curios Mr. Gonzalez has in his room, and the meaning behind them.

One rather new addition, is five mini-pumpkins that line the window still. These pumpkins were designed and created by students. Mr. Gonzalez said he bought the mini-pumpkins in hopes of bringing a festive fall atmosphere to his classroom. Students then asked if they could take one to decorate. All the mini-pumpkins are unique, Angelica Contreras decorated the Mike Wazowski from Monsters Inc., Gigi Meyer created the baby pumpkin, Jennifer Nazareth created a Pillsbury Dough Yeltsin, Casey Kowalczyk created a unicorn, and Abby Legner created a Vladimer Put-kin.

As many know, Mr. Gonzalez has been coaching girl’s cross country for nine years and it has become a part of who he is. Cross Country is more than just a sport to Mr. Gonzalez, “it is a symbol that connects the classroom beyond just for class… I want things in the classroom that reflect academic life but also that show personality beyond the normal academic life.”

During Mr. Gonzalez’s time in the pods last year, he, along with alumni Ali Nix ‘17, “were looking for something to put on the pod walls to make it homey and Nix came up with the idea of the quote after finding it on Google.” The quote reads, “I don’t want you to think like me. I just want you to think.” It has become a central focus of Mr. Gonzalez’s teaching style.

In walking into Mr. Gonzalez’s room you might come across an ALF mask. ALF, which stands for alien life form, is a character from the ‘80s T.V. show by the same name. Originally the mask was in the possession of a former Nazareth teacher, Mr. Mike who taught at Nazareth for 30 years before passing away in the summer of 2012. He is remembered in many different ways at Nazareth, such as naming the baseball field after him or printing his name on Powderpuff sweaters. Mr. Mike was a mentor and friend to many of the teachers at Nazareth, including Mr. Gonzalez. After he passed, Mr. Gonzalez kept some of his things in order to, “embody as much of his legacy to carry it on because he can’t do it for himself anymore.” In doing this, Mr. Gonzalez took knick knacks like the ALF mask, that had great significance, and keeps them in his classroom.

In 2011, Girls Cross Country qualified for state for the first time in Nazareth history. During sectionals at Niles West, alumni Maggie McKenna lost her shoe within the first 400 meters of the race. She continued the race in one shoe, set a new personal record, and the team qualified for state. Mr. Gonzalez then asked to keep the sock from her shoeless foot saying, “she was really weirded out by [the request]” but complied and her legacy lives on through her sock on Mr. Gonzalez’s board.

Standing high in the corner of the room is large cardboard cutout of former president,Theodore Roosevelt. For a few years, Mr. Gonzalez had taught American History. As an American History teacher he took a particular interest Theodore Roosevelt saying that he is, “One of the most interesting presidents to teach,” and believes that “if you’re going to teach Teddy, you have to have a life sized cut-out of Teddy.” The cardboard cutout was therefore a must have when Mr. Gonzalez got his first classroom.

After studying Syria in his class, alumni Bridget Brodlo, Molly Owens, and Madeline Schierl were so moved that hey wanted to do something for Syrian children and brought it up to both Mr. Gonzalez and Mr. Jurasas. Mr. Gonzalez came across a woman who was working with an organization based in Lebanon that helped Syria and Syrian refugees. He reached out to her and connected her with the girls. She walked the girls through five different ways to help, and after looking at the different options, it was mentioned that the most needed donation was money to educate Syrian children and Seniors for Syria was born. “Because of us, 400 kids between the ages of 3-5 had the opportunity to go to school for two years based on the money we raised,” smiled Mr. Gonzalez, “while the banner was created as a demonstration of legacy.” Mr. Gonzalez feels that Seniors for Syria was special and truly exemplifies what it means to be a Nazareth student. That is, taking the next step of applying what you learned into life, that’s when it becomes special.

Beginning this year, triangle shaped desks replaced the standard desks. These desks have provided a different type of learning environment and Mr. Gonzalez says he 100% loves them, way more than the old desks. He says that these desks have forced him to let go of the reins and let his classes become more student centered and less teacher directed. Mr. Gonzalez also feels that different arrangements bring about different reactions from students and has tested many different arrangements based on the day. He says, “it’s amazing to see how changing a desk arrangement can change the amount of collaboration in a room,” and that the most effective arrangement is the “snake” or students facing an each other in a long row.

Teachers all have one unique supply that differs from all other versions. For Mr. Gonzalez, this would be his binder clips. His binder clips include faces of almost every emotion. The binder clips are used wisely too. Every quiz or test, Senior Caitlin Convery will pick out the binder clips based off of how she is feeling about the quiz or test. Mr . Gonzalez feels that in doing this he is,“let me into the student’s psyche,” which he finds very interesting.

As one can see, Mr. Gonzalez’s room is filled with many unique knick-knacks, each telling a different story. Many Nazareth teachers decorate their rooms like this so don’t hesitate to ask Mr. Gonzalez or another teacher about an item in their room. There very well may be a cool story to share and learn about!