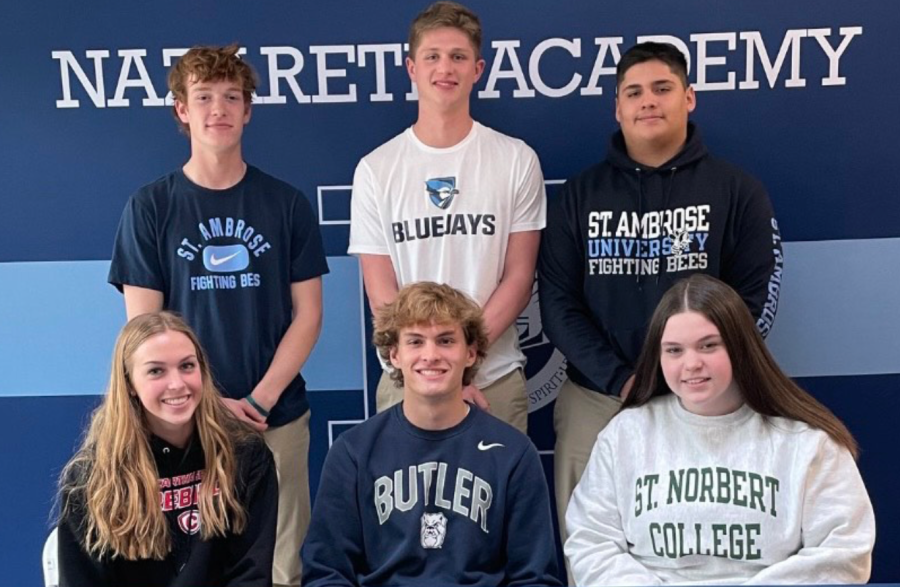 This year, there are many Nazareth Academy student athletes who will continue their athletic careers by playing college sports. There are 24 seniors who have commited to play college sports.

Senior Gillian Grimes is committed to Penn State to play Division 1 Women’s Volleyball. Before announcing her commitment to Penn State, Grimes had previously committed to Michigan State but realized it wasn’t the right fit for her.

Grimes was drawn to Penn State for various reasons. She said, “Penn State was my dream school freshman year because I visited the campus then and that’s when they started recruiting me. Also, I wanted to go there because a lot of my cousins went there. And, Katie Hurta going there made it a lot easier to choose, too.”

Grimes has been playing volleyball for the majority of her life, starting in second grade. Ever since sixth grade she knew she wanted to play college sports. A factor in this decision was due to the fact that both of her siblings played college sports.

Senior Peter Roll is committed to play football at the United States Naval Academy where he values the great education and the athletic department. Also, a huge bonus to the school is that he is guaranteed a job after college.

Because he started playing football so young, the sport has greatly influenced Roll’s life. “Football has provided me with so many opportunities to meet new people and have amazing experiences that I wouldn’t trade for anything.”

Roll said, “I watched a lot of football and learned as much as I could about everything on the field so I could understand the field better and be a smarter player. I also had to put in lots of hours with training such as lifting and working on mechanics on the field.”

Head Varsity Coach Tim Racki praises Roll for his athleticism, intelligence, and determination. Racki said Roll was able to better his teammates by picking up easily on different plays and schemes and teaching them.

Racki also commented on Roll’s work ethic. “Since he’s stepped on the campus here at Nazareth, it’s been incredible. He’s been a hard worker on and off the field: an incredible student and explosive football player. It’s infectious too, because all the other guys worked hard when he was working hard,” said Racki.

Racki also recognized Quentrell Harris.  “A tremendous athlete, player of the year in the Conference and All-State. He’s incredibly selfless, with a great sense of humor, which made the team love him and follow him.”