A look back at the Final Four in NOLA 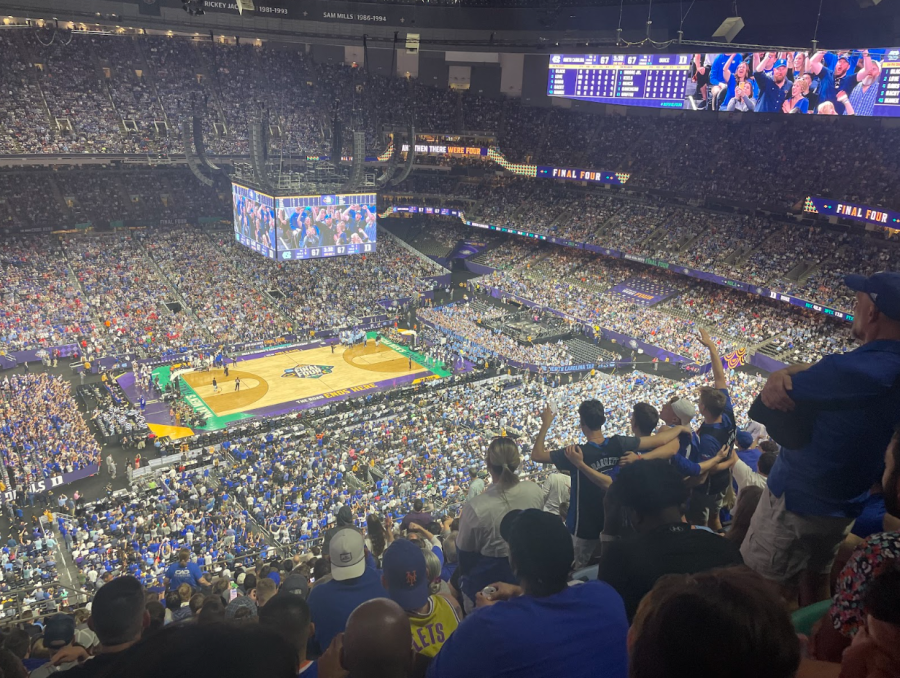 In a crowd of thousands, four Duke fans danced to “Don’t Stop Believin’” by Journey at the Duke vs. North Carolina Final Four game on Saturday, April 2 in New Orleans, Louisiana.

The final four teams faced off in the NCAA Men’s Basketball tournament this past week on Saturday, April 2 and Monday, April 4 in New Orleans, Louisiana. The North Carolina Tar Heels, Duke Blue Devils, Kansas Jayhawks, and Villanova Wildcats competed after a challenging road to the Final Four.

The first Final Four game had Villinova, a 2 seed, playing Kansas, a 1 seed. The score of the game was 81-65, Kansas, which was their third game of the tournament where they had won by double-digits.

At the start of the game, Kansas led 10-0 which they were able to hold throughout the game. The half time score was 40-29 supported by senior David McCormack and senior Ochai Agbaji who scored a total of 46 points at the end of the game.

The second Final Four game had Duke, a 2 seed, playing UNC, an 8 seed. The final score of the game was 81-77, UNC, a much more competitive and close game than the first. The game included a total of 18 lead changes.

Duke was able to pull off a three point lead of 37-34 at half time. North Carolina’s sophomore Caleb Love scored 6 points in the last 30 seconds of the game, a three pointer and three free throws.

It was a tough and emotional game for Duke since it was Coach Mike Krzyzewski’s final game before retiring. It was also his last game that he would play against their long time rival, UNC.

The Duke vs. UNC rivalry might be one of the most competitive rivalries but it also makes it some of the best games to watch.

The UNC vs. Kansas game was another close scoring, competitive game with the final score of 72-69, Kansas. Kansas was up 7-0 at the start of the game until UNC was able to pull it together and was up by 16 at one point and 15 at half time.

Kansas’s free throw percentage was 75.00% in the first half and then dropped significantly in the second half to 50.00% which could have easily cost them the game if McCormack hadn’t had made another shot in the last 22 seconds.

UNC’s three point percentage had also dropped significantly from 27.27% in the first half to 16.67% in the second half. In the wicked last 22 seconds of the game, UNC missed one three pointer after another costing them the title.

This was the biggest comeback in the history of NCAA Tournaments dating back to Loyola Chicago’s comeback against Cincinnati in the 1963 title game where they were behind by 15 points.

After a well deserved fight against the other teams, KU won their fourth title and most definitely not their last.