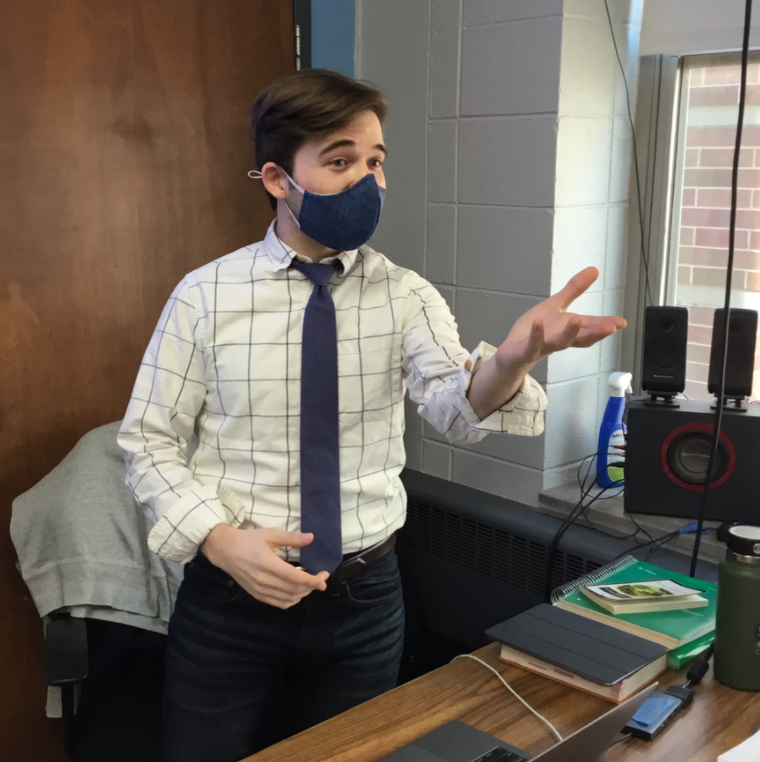 Nazareth welcomed new English teacher Dustin Uher at the beginning of this school year. As a child and a teenager he lived in Homer Glen, Illinois and even went to Naz rival high school Benet Academy.

After high school, Uher headed to Boston College’s  Lynch School of Education and Human Development where he graduated with a Bachelor of Arts degree in both English and Secondary Education and with a concentration in Educational Theatre.

During his time in Boston, he also became an actor and took acting roles in Boston and New York. Uher describes some of his favorite roles, “in college I got to play Hamlet but I also liked Peter from Peter and the StarCatcher. It’s basically about this little boy who doesn’t wanna grow up and it’s all like pirates and a comedy, but also super heartfelt and I just really love that story of you can grow wise, grow old but never grow up kind of thing… I got to pretend I’m a boy on stage for a couple of weeks which is awesome.”

But, life on the stage was put on hold. Uher felt things were moving too fast out east, so he decided to come back home and build a life here.

Uher enjoys being a teacher at Nazareth and appreciates the values that Nazareth instills in their students. He is also looking forward to becoming a part of the school’s future. “What drove me to finding a job here was that there was sort of this ‘education of a whole person’ component where we don’t only care about you guys just as students, but we also care about you as citizens and human beings – so you can grow in that way.”

Uher also added, “I think I’m really looking forward to getting to know the faculty and staff members a little more and being more involved outside of the classroom. I would like to develop relationships with my students by supporting their co-curricular interests outside of class, too.”

Outside of being a teacher and an actor, Uher enjoys music and nature. “I do a lot of songwriting, I play guitar and song write. I have like 5 or 6 acoustic guitars.” Uher shared, “Me and my girlfriend go hiking a lot. We saw Matthiessen State Park when it was frozen over. I think finding the little gems in nature is super fun.”

The English Department and Nazareth in general is lucky to have Uher join the faculty this year. Someone with a diverse background and passions for English, drama, music and nature is a great addition to the Nazareth family.