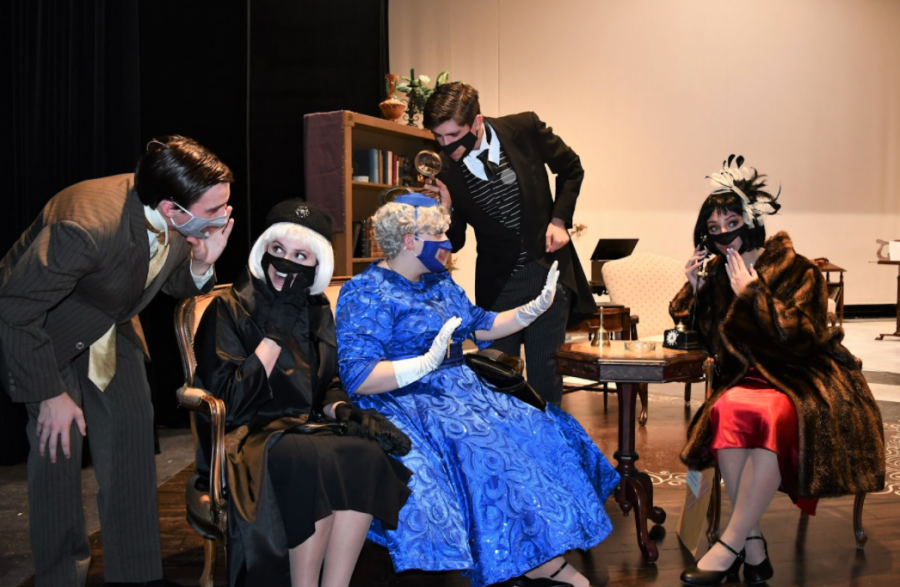 Nazareth Academy’s Drama Department mounted a production of the play Clue written by Peter DePietro based on the classic board game this past October. We attended the opening day production on October 28.

We experienced a play with several twists and turns and an action filled plot. It takes place at Boddy Manor where various characters are blackmailed for their past by Mr. Boddy. Several murders take place and it is up to the audience to guess “whodunnit?”.

This play was both a comedy and a murder mystery. Although these two genres may seem opposite, both humor and thrill are portrayed beautifully with hilarious remarks from the actors in the middle of intense scenes. Junior Ian Surowiec provided comic relief through the production with his dopey, but lovable character Colonel Mustard.

The play is also fast moving and entertaining according to Chemistry and Biology teacher Patricia Filomeno. She is not always a huge fan of theater, Filomeno said, “Usually I’m bored during plays, but I was not bored once during this one.” Not only did the teachers enjoy the play, but students did as well.

“It was really good,” said Freshman Edward McNamara. His favorite character in the production was freshman Jay Conkin who played the Chief of Police. Conkin was well practiced and although he played a minor role, he stood out to the audience.

Along with the actors being spectacular in transforming into their characters, another eye-catching aspect of the play was the set — specifically, the lighting was amazing. The setting takes place on a dark, stormy night and in the background, there were occasionally flashes of blue light at the same time thunder would sound.

The stage was set into different rooms where the scenes took place. Each of these rooms had different flooring which added an extra element to the scenery, along with furniture so the audience could tell which room is which. It could’ve been difficult to be able to decipher between the seven different rooms, but the cast pulled it off perfectly with no confusion.

Sophomore Sara Mazur agreed that the crew did a great job. She said, “There were really good sets and props.”

As far as choreography, the cast did an excellent job. When the doorbell rang, everyone would look up, to the left and then straight. We thought this was such a perfect action, as everyone moved in unison, and you could tell it was very well rehearsed.

Another piece that stood out was in a delightful scene where the cast rushed around and chased each other through the rooms with an envelope of evidence. They threw the envelope up and executed perfect catches each time. We can imagine the amount of skill it took to pull off these stunts perfectly and for this we applaud both the cast, and those who choreographed the movements.

Towards the end of the performance, there were several scenes where the cast members did a “reverse” effect. This well done special effect left the audience laughing and applauding.

Overall, the play was delightful, quick moving, and entertaining for audiences of all ages. Of the random people we interviewed that attended the play, they all rated the production five stars, and we agree with this rating. We suggest that all who enjoy an entertaining evening with family and friends attend Nazareth’s spring performance coming soon!