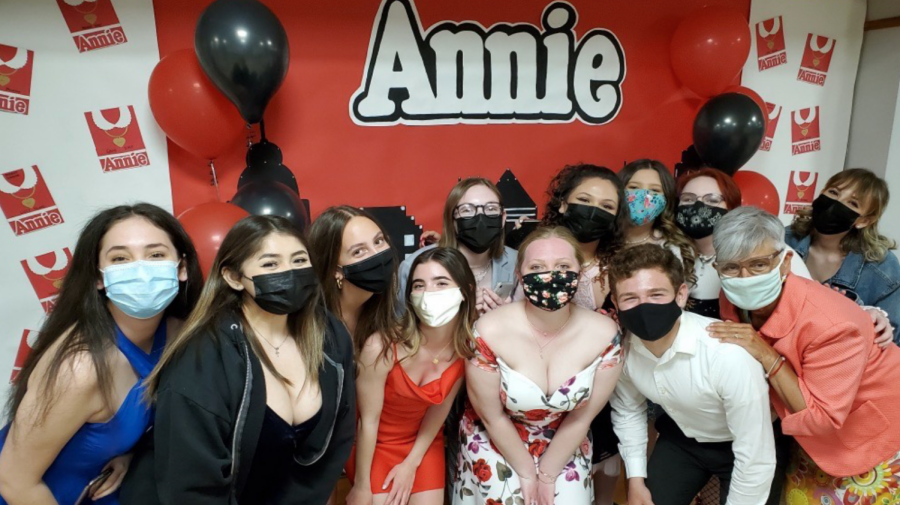 Last year, the beloved spring musical was canceled due to COVID-19. But this spring, despite the obstacles, the Drama Department, led by director Kim White, was able to mount the virtual musical Annie. While the final production was a huge success, the cast and crew had to take many precautions and adjust to very different rehearsal and performance norms.

In a typical year, White would cast up to fifty students to fill the stage for a musical. This year, however, the casting was limited to around 30 students. Though many students were excited to try out, some did not want to perform without an audience or rehearse remotely.

White shared that some students had an aversion to the virtual format. “Understandably, some of my students that have participated in previous years did not want to be in this year’s play because they did not want their performance to be on Zoom.”

White was not going to let the challenges facing the musical stop her or the show. While rehearsals for Act 1 were held entirely over Zoom, there were opportunities for Act 2 rehearsals to happen in person. Sophomore cast member Gavin Dimit realized the limitations but knew the resilient group could make it work. “There was a scene where I was supposed to go back to back with another cast member, but we couldn’t because of COVID,” Dimit said. “Mrs. White even had a 6 foot stick to keep us socially distanced.”

Since most rehearsals were on Zoom, students did not get to meet their music or dance directors in person until days before the production was filmed. Senior cast member SJ Weidner admits that virtual rehearsals were not as exciting as the in person rehearsals she has been a part of in the past.

Weidner sees a bright side from all of that time spent online though, “A skill I learned is how to get through long virtual meetings, how to navigate those and motivate myself to pay attention.” Even still, Weidner says it was when the cast was able to be together in person that it really clicked for her. The first time she was able to harmonize with the cast was a highlight.

It was just before Easter Break when a film crew captured the second act on multiple cameras from different angles. The edited performance was then made available to those who bought a ticket.

This year, virtual tickets were sold, allowing a household or device access to the pre-recorded performance. Even though this year’s show was virtual, White said, “We had over 100 viewers each night it streamed.” Considering that entire households could have been viewing on one device, it’s difficult to get an exact audience count.

While White and the cast and crew are very proud of their work and the fact that they overcame so many obstacles, they are looking forward to a musical with a little less “drama” next year. “Next year I want to do an uplifting show to get everyone pumped to be back in the theatre,” said White.